Plesk is one of the most full featured control panel in web hosting industry. Due to availability in both Linux and Windows platform Plesk is the choice of many System Administrators. Right now the latest release of Plesk control panel is Plesk Onyx. While restarting or troubleshooting DNS server in Plesk Onyx Linux many system administrators may encounter the following scenario with some “localhost.rev” error.

In Plesk Onyx Linux, BIND DNS serer (named) always fails to start with above command. While checking the status of named service you may find an error message “loading from master file localhost.rev failed: file not found” along with several other file not found. The situation is demonstrated in the following figure. 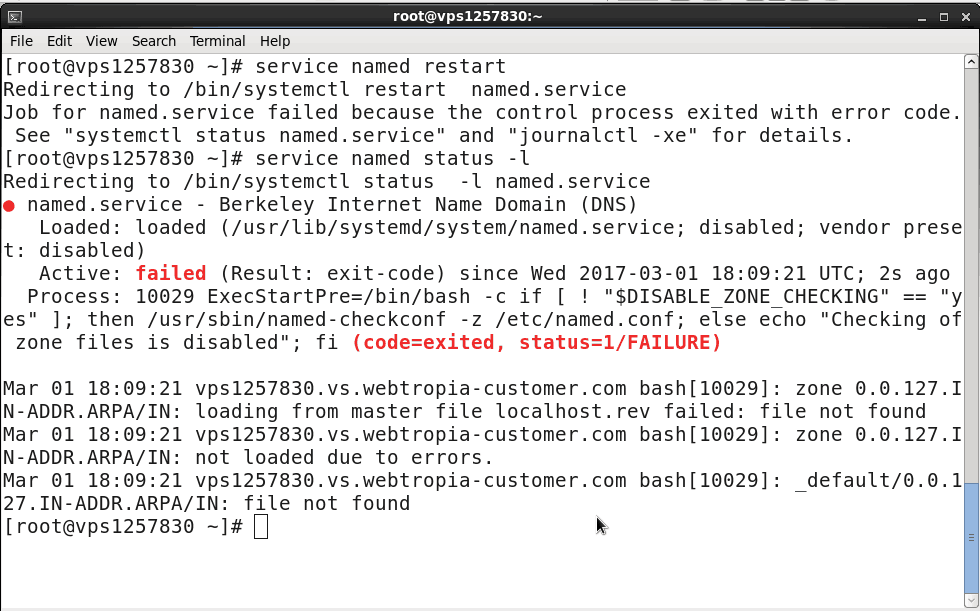 My Story and System Environment

I’m writing this troubleshooting tutorial after facing the issue while setting up Plesk Onyx in a new server and no way I’m related to Plesk Developer team. I was playing around a little regarding ‘rndc’ setup for Slave name server. During that I altered some configuration and that leads me to writing this finally. I read several online tutorial including those linked above. Then I contacted Plesk professional. But as my license is from my server hosting provider they redirected me to hosting provider for support. Now after looking a little my hosting provider confirmed it as a complicate issue and asked for a diagnosis charge of USD 25 / 15 minutes and left me alone.

Lets try to understand why this is happening. The striking part was the problem is very persistant and reproducable in any server. It’s impossible that a control panel like Plesk don’t have a running DNS server. Following way of diagnostics may be helpful

This saliently indicating that ‘named’ is not directly responsible for a DNS server in Plesk Onyx for Linux. Now let’s find what it is..!!

In the 5th point look that the default DNS server is working even after restart. So my approach was let’s find out what processes are enabled during system restart in freshly installed Plesk serve. Then find out something similar to ‘named’. In CentOS 7.3 environment you may use the following command to find processes (daemons – read more about daemons in RedHat ).

Then directly pipe it and find any ‘named’ in this with the output.

The following figure explains the scenario for me.

You may clearly look that the service ‘named’ is disable on start up.  So it’s not what is running the DNS server. The process responsible for DNS server is ‘named-chroot’ rather ‘named’ itself. Now I don’t know why then Plesk keep the process ‘named’ i.e. unmodified daemon of BIND 9 installed. But, while playing around things, I had altered some configuration. And was trying to turn on the service using familiar ‘named’ instead ‘named-chroot’.

If you are with me till now you already know the solution. But if you liked to jump to get the situation solved this is for you.

Check everything is working fine

You’re finished doing this, but before leaving just ensure everything is really working as it should.

If all above are positive for you, Congratulation the localhost.rev problem is over for you..!! 🙂 🙂

You may become interested what is this ‘named-chroot’ in Plesk Onyx Linux. In Linux chroot refers a procedure to keep users jailed in their respective home directory. A details about chroot and how to set it up will be a next post. The service ‘named-chroot’ run under an user ‘named’. Now, I think, for security reason Plesk want to keep this user chrooted.

You may notice, and surprised, that the directory derivative is set to “/var” in “named.conf” file. This theoretically means ‘/var’ is the directory where your DNS zone files and all other Zone related files are located. Surely this is not the case. You’ll find not a single zone file located just under “/var“. Plesk tricks to jail the user ‘named’ in “/var/named/chroot” while running the daemon ‘named-chroot’. Now for the user ‘named’ and for the daemon ‘named-chroot’ “/” actually indicate “/var/named/chroot/”. So, “/var” will become “/var/named/chroor/var” and you’ll find all your DNS Zone files, DNSSEC keys and all other DNS Zone related file in this directory.

We use cookies to ensure that we give you the best experience on our website. If you continue to use this site we will assume that you are happy with it.OkPrivacy policy